At an Island Pace – Bang Bao

Bang Bao used to be a classic Thai fishing village with life centred around a narrow pier of traditional wooden stilt houses and boats moored up ready for sea. On land, more houses, some with their own small jetties, were dotted around the beautiful large bay, local shops clustered along the little soi leading from the main road down to the pier and a school and temple sat on the mountain side.

Nowadays, much of that has changed as tourism has replaced fishing as the principal source of income and the village has established itself as the island’s main point of departure for the myriad of competing trips exploring the archipelago, both above and below water.

The stilt houses have been converted into the odd homestay, a few dive shops, a handful of large seafood restaurants but, in the main, into a plethora of almost identical shops, rammed to the gunwales with souvenirs. Small offshoot structures have been added with guesthouses or private dwellings and around the bay itself, there are resorts, bungalows and a large condo development.

The pier itself has been extended to accommodate the numerous dive, speed and snorkel boats, with them tied up two or three deep along the now concrete jetty, which sports a new lighthouse at its far end. At the start and end of each day, as the tourists set out and return, the narrow walkway leading up to the boats is the busiest place on the island.

Nonetheless, outside of rush hour, there is lots to explore and sitting out over the water for lunch or dinner is still a great holiday experience. Whilst this is not a beach area, that is another couple of kilometres further south at Bang Bao Beach (Klong Goi) or back to Lonely Beach to the north, there is good accommodation from budget to boutique around the bay and on the pier.

The atmosphere is peaceful and laid back, with a few boats still fishing and unloading their catches and locals living their lives in amongst the hustle and bustle as they have always done. There are also some quite wonderful views thrown in for good measure.

Bang Bao has been particularly hard hit by Covid-19’s business downturn. We have removed businesses we know will not return and marked selected others as currently closed – at this stage, it’s impossible to say if they will restart in the future or not? Separate to this, all venues will of course also adhere to the regularly changing Covid rules.

Around The Bay, Northern Side

Heading south from Bailan Beach, the road snakes and curves around the coastline, skirting through the forest past the odd staff building and the newly constructed Reggae Hill, a bar and restaurant. DARA (currently closed), a private rehabilitation centre, sits at the top of the last hill, before you drop down into the outer reaches of Bang Bao itself.

Here, construction is now in full swing of the Aquarius project – hotel, villas, shopping and restaurant mall (that’s the bit on the left). Principally aimed at the booming market for affluent Chinese, it straddles all the way along the cliff on this coast and is the largest project to hit Koh Chang for many a year. Scheduled opening is for 2022/23. The Hong Kong investors are also developing the offshore island of Koh Man Nai, which you can see from the Koh Chang viewpoint between Kai Bae Beach and Lonely Beach.

Shortly after the building works, on the corner with Coconut Garden, its own bungalows up on the hill above, a small road leads right towards the sea. This takes you to the north side of the bay, where you’ll find a selection of bungalows, resorts and homestays spread out right the way along the hillside and water’s edge.

The narrow street first passes the track down to a car parking area, which you can also access from near the pier and then the gated entrance up to the cliff side area of Aquarius – this will be the hotel section and its development is also now up and running. The villas will ultimately link from the hotel here back over the hillside to the mall area you passed on the way in – it’s one big old site.

After a few more twists and turns, the back road reaches Cliff View Resort, bungalows in tiers up the slope and next door, Cliff Cottages. Now under the wing of BB Divers, this is a mixture of a/c rooms along the front and on the hill, alongside glamping tents, which overlook the little cove beneath, a great spot for snorkeling.

Nirvana Resort (currently closed) sits at the other end of this cove and it too has its own cliff-edge walk and sunset viewing-deck on this side.

The road goes straight through Nirvana Resort and out the other side, curving past Homestay Bungalows before climbing up past a small Italian development of pool and restaurant and reaching Bhuvarin Resort and Resolution Resort, both of which have their accommodation and pools tiered down the steep slopes towards the water.

At the very end, you can drop down to Khao Nok Homestay with its restaurant, bungalows and wooden jetties. Beyond them, it is possible to venture down a tiny track to the naval shrine at the end.

This shrine is dedicated to Admiral Chumphon Khet Udomsak, the founder of the Thai Navy and is one of several on the island, the others being outside of White Sand Beach and in the very far southern corner after Long Beach. All commemorate the loss of lives suffered during WWII, when the French Navy clashed with the Thai fleet off this coast, sinking three of its ships, the so called Battle of Koh Chang.

Back on the main road, after passing the motel, Alysia Springs, the route reaches the turning down to Bang Bao Pier itself, with a good cheap little Thai restaurant opposite as well as the local school and temple. Another cheap diner (currently closed) used by the songthaew taxi drivers sits on the corner, whilst various other local shops, motorbike rentals and food stalls line each side as you head down towards the sea.

Towards the end of the street, Sunny Inn is tucked away down a small plaza on the right with Koh Chang Divers at the entrance and Seascape and BB Bungalows, long stay rooms and bungalows, across the way. Scuba Dawgs has now been folded into BB Divers, so their shop has closed.

At the bottom, where the ubiquitous 7-11 dominates the beginning of the pier, the street opens out into a car park on the right hand side, with Bang Bao Post Office at the rear. A taxi rank is on the left.

Walking down the pier, passing a wooden jetty on the left leading to the very good local clinic, souvenir shops and ticket booths run from one to another, with Tee Fishing, a very well stocked outlet for the enthusiasts and Peace Moon, bespoke handmade jewellery, tucked in amongst them. Walkways branch off to the homestays of Koi Sea House, Good View, White House, Televille and the restaurant, Chilli House.

Across the way are the seafood restaurants of Ruan Thai and Chow Lay. Very popular with Thais and tourists alike, they offer vast menus of dishes such as seabass steamed in lime, soft shell crab with black pepper or raw prawns with chilli dip – a table by the water for a long lazy lunch is still a special holiday memory.

Continuing down the pier, a second Peace Moon lies before the stilted wooden jetty leading to Barracuda (now closed permanently), a cosy bar/restaurant over the water, with the cute Bangbao Paradise Homestay alongside.

Next up, BB Divers has their main office, with Bang Bao Delight, the coffee shop and bakery a few doors further down. Buddha View (currently closed), a very popular chill-out restaurant with simple rooms, is accessed down a small side alley immediately afterwards.

The End of the Pier

At the end, as the pier begins to open out, another offshoot walkway leads past the simple guesthouse of Ocean Blue before reaching the last remnants of the semi- abandoned Koh Chang Sea Hut, now just a solitary building after the government removal of its illegal individual designer huts.

After this, the pier becomes purely functional with the boats tied one against each other, tours, dives and local fisherman having prime spot at the start and towards the end, fishing boats from the offshore fleets, in port to fill up with freshwater and diesel.

Many of these are squid boats which use light to attract the catch and can be seen at night from the different beaches, their powerful high watt bulbs, seemingly equidistant from one another, creating an impression of a distant shoreline as they bob away on the horizon.

Around The Bay, Southern Side – Bang Bao

After the turning down to the pier, the road starts out for the end of the island passing the temple, cheap bungalows at Hippy Huts and then running directly behind the vast condo development of Tranquility Bay, which dominates the southern side of the bay. Rasta View and its huts at Rasta Beach, both reggae inspired establishments, are found along the way.

It is now just a short way to Hat Sai Noi, a tiny strip of sand which is home to some chill-out beach bars, restaurants and small guesthouses. Beyond this, another kilometre or so brings you out at Bang Bao Beach Klong Goi, the last area on this west coast.

Permanent link to this article: https://explorekohchang.com/koh-chang/beaches/bang-bao/

Bang Bao – Hotel Deal of the Week at Agoda 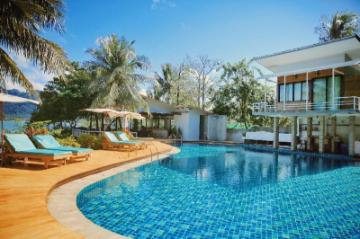