At an Island Pace – Klong Son

Klong Son is the first area you reach when heading down the west coast from the two ferries, Centrepoint Ferry at Dan Khao and Koh Chang Ferry at Ao Sapparot. An unremarkable street with a central crossroads and a hill at either end, it is a busy, bustling Koh Chang town, home to building merchants, petrol stations, cement works, vegetable shops, a 7-11 and seemingly not much else.

However, by returning under your own steam or choosing to stop for a few days in one of the resorts or villas, you will find it has a lot more to offer – a wonderful inland road, with a waterfall at its end, a thriving little fishing community, a large temple, the largest private residence development on the island and a beautiful bay.

Proudly sitting on the hill nearest to the ferries is the Chinese Temple, where the godfather of Koh Chang, Chao Po Koh Chang has residence. What was originally a small affair, the temple and its environs have slowly grown with the success of predictions given by the godfather and his wife and there is even a yearly island-long procession to ensure that he stays firmly fixed in the locals’ thoughts.

Drivers will beep their horns three times on passing and it is free to have a look round, though what different rituals one should do on entering the temple is impenetrable without the help of a local to explain.

Dropping down the hill, a turning on the right, opposite the army jeep rentals, leads past Pukdee Bungalows, Blue Sapphir Bungalows and Villa and White Swan Villa before emerging at the entrance to the largest private development on the island, Blue Haven Bay (formerly Siam Royal View). Go straight on and you’ll find an old Thai resort, 5 Star Resort, with motorbikes for rent as well as great views over the development.

Split into two distinct sections, this part of Blue Haven comprises a grid system of near identical ochre coloured private villas with Lanna style roofs, with the beach at the front and the 9 hole pitch and putt golf in the centre.

Some villas sit directly on the beach, some look out over the golf course on the near side, some do the same at the rear. There’s also another row between sea and golf course and yet more on an adjoining little beach, Half Moon Bay. Sandwiched in amongst the front row of beach villas, you’ll also find the boutique resort of Little Sunshine, though it too is in the exact same style.

At the northern end on the beach, The Beach Club is both an understated reception and a restaurant, with with a wonderful 30 metre pool off to one side. Next door to the pool, a row of non-descript but deluxe rooms makes up the core accommodatipn of Peninsula Resort. Owned by the Kacha Group (White Sand Beach), they also rent out various villas around and about the complex.

The beach, is known locally as Chang Noi and it’s a mightly impressive sweep of sand, with lovely, clear though very (low) tidal waters. A unique seawall of anamorphic boulders runs across the front of the northern end.

If you are in the northern end, you can pick up a small rough track to connect to the southern area. Here, larger villas, including Laguna Beach at the far end, dominate the beachfront. Shambala, another beach club and bar, with a slightly smaller pool, sits in the centre. Behind them, accommodation is in a 3 storey condo block and a boutique lodge, The Boathouse. Of course, you can walk from south to north along the sand.

From this southern end, if you take the proper route out (with its crazy paving surface), it brings you first to the hotel Marina Sands Resort and next door to that, a large marina, which berths both charter yachts and some other pretty impressive vessels.

Continue on out of the development and after passing a couple of tiny cheap places to eat and some local houses, you emerge back on the main road, with the large PTT gas station opposite. This is the first of two PTT stations on the island – the other is in Klong Prao – and needless to say, it’s also host to a 7/11. There is also an Amazon coffee shop (surprisingly good strong brews) hidden away in the back. You are about 500 metres south from the original turning in by Pukdee Bungalows.

Street Area towards the 7-11

Heading further into town, cheap diners, a building merchant, a garden centre and ramshackle motorbike repair shacks line either side of the street. At the bridge, the aptly named Riverside Guesthouse looks out over the river (dry at most times of the year), with Papa Il Buffo, the tiny Italian restaurant, out front. More food stalls and a mini Big C then bring you to the central 7-11, which sits at the crossroads in the middle of the village.

Street towards the Sea

Here, the road to the right leads past the homestay style Garden Lodge, hidden away down a track and then curves back and forth before branching off either to the small resort Feel@Chill and the local temple or to Havana, a small motel with pool. A few hundred metres from there, Family Guesthouse is located next to the small pier with its fishing community.

You can walk to the tip of the jetty where the boats are moored up and gain a great view of both the tree-lined sandbar and the inlet it creates, as well the bay and ocean beyond.

Offshore, there are two uninhabited islands, Koh Mapring off the southern side of the bay and Koh Chang Noi off the northern headland. Both can easily be visited by taking a kayak, with some good snorkeling off either and even a small beach on Koh Chang Noi.

Inland to the Waterfall and Elephant Camp

A left at the 7-11 crossroads takes you past the school along a wonderful winding road through fruit orchards and lines of rubber trees, deep into the valley, until ultimately ending at the ford which marks the entrance to Klong Son’s waterfall, Klong Jao Leuam.

This many tiered waterfall, one of the least known on the island, is free to visit, but the local landowner does charge 40bt for you to walk through to the footpath.

As well as being the base for some excellent trekking, this inland area of Klong Son has a couple of places to stay at Phet Luran Bungalows and Evergreen Resort. Besides them, your curiosity will undoubtedly be piqued by three other spots found along the way – Koh Chang’s orthodox Russian church, a cockfighting ring and a huge Khmer reproduction gate. The latter is uncannily like somthing out of a Siem Reap guidebook, but is actually just a folly, behind which sits a German man’s private home (come castle).

Look out too for Koh Chang Animal Project, which does an invaluable job in treating both pets and the unwanted animals of the island and the hidden gem of a restaurant at Blues Blues Art Cafe.

Back at the main road and continuing past the crossroads, there’s food market area on the right – it opens a couple of times a week – and some other small restaurants for one dish over rice and noodle soup. Next door to the wedding shop, Kebab Station, both the obvious and a bar with a pool table, has ingeniously taken over the old petrol station.

After the cement works, the roadside Grand Orchid Resort, popular with Thai weekenders, is the first of the resorts at this end. Klong Son’s other nightlife venue, Cool Down Bar and Lounge Club, sits next door. Opposite there are vehicle repair shops, a good cheap restaurant and a barber.

At the base of the hill, you reach the long winding street which leads to Aiyapura Resort, with Banphu Resort, motel style accommodation and not to be confused with Banpu Resort in White Sand Beach, a few metres in. Follow the street to the end and Aiyapura Resort, one of Koh Chang’s first resorts, dominates the southern headland – it’s well worth a quick visit (if they let you in) for the magnificent views of the bay below.

Incidentally, if you take the road off to the right shortly before Aiyapura’s entrance you can loop all the way back to the fishing village pier and from there back up to the 7/11 crossroads.

Immediately after the Aiyapura Resort turning, the main road begins its ascent up over the mountain, an interesting journey to say the least complete with both very steep sections and some switchbacks before it drops down into White Sand Beach and the west coast.

Permanent link to this article: https://explorekohchang.com/koh-chang/beaches/klong-son/

Klong Son – Hotel Deal of the Week at Agoda 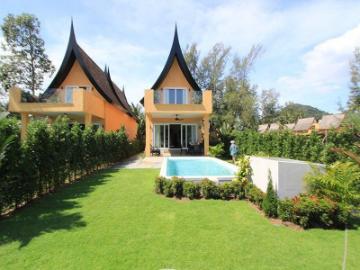