Looking down Klong Chao Beach from outside Tinkerbell Resort

Situated on either side of a large concrete bridge at the point where the river meets the sea, Klong Chao Beach (or Klong Jao) is generally regarded as the tourist centre of the island, with its mixture of bungalows, guesthouses and backpacker rooms on the river or inland and fabulous upscale resorts by the sea.

At its northern end, there are a couple of restaurants and shops, a bar and cafe out over the water and even some live music but everything is very low key, so there are no sarong sellers or massage beds, tattooists or ticket sellers, just a nice laid back atmosphere.

The beach is one of the Koh Kood‘s finest with a long stretch of powder sand and calm, blue waters and it is within easy walking or kayaking distance of those guesthouses back on the river.

Overall, Klong Chao Beach has become a popular choice for travelers on a budget or for those wanting high end accommodation on the beach and given its position, it makes a great base to explore the island itself.

At the northern end, Tolani Resort (formerly Away) occupies the headland, cut off from the main action by a small sea channel which in turn leads upriver to the central bridge and beyond into the mangroves.

Opposite Tolani, shortly after the sandbar, Peter Pan Resort starts the row of resorts on the actual beach, with Wendy the Pool, High Season and Tinkerbell Privacy completing the luxury hotel set all the way down to the southern end.

On the river behind Peter Pan Resort, their wide range of rooms dominate one bank with the small resort, Little White Bird squeezed in at the end. On the opposite side, Koh Kut Express Speedboats has one of their main arrival and departure jetties, with the old style wooden fishing house Doy Homestay, base for its SUP centre and snorkeling tours, Koh Kood Boats, just alongside

Mark House sits by the bridge on the other side, its wooden jetty used by the speedboats of the island-hopping service Bang Bao Boats for Koh Chang and Koh Mak as well as for its own tours, TJ Boat Trip.

Beyond that, the cheaper guesthouses of Klong Chao Homestay, Ta Yai Homestay, Mangrove Bungalows and Cozy House line the river as you head upstream, with only mangroves as company on the other bank.

Heading north towards Tolani Resort from the central bridge, past the tour shop and minimart, the main road hugs the water passing the pharmacy and then the two cheap restaurants Ma Der Tum (hot-pot style) and Rimtang Kitchen (currently take-out only).

Around the corner, look out for Tawan, the live music venue and late night bar, which is perched up on the hillside. The Issan restaurant Hin Suay, itself also serving take-away only at the moment, is a a few metres along on the same side.

Opposite them, the tiny I Ra restaurant (currently closed) is located next door to the wooden walkway entrances to Sunset Bar and Viewpoint Cafe, two converted stilt houses with fabulous sunset views out over the inlet and the sandbar. At the far end, Tolani Resort has its own cafe, Chugga on the grass at the bottom of the hill.

This marks the end of Klong Chao and the road now leads north towards the island’s administrative areas in Hin Dam together with its hospital and police station, Ao Tapao Beach and the waterfall at Klong Yai Kee. This route also links to the Koh Kood fishing village on the eastern side, Ao Salad, home to the arrival and departure pier for boats from the mainland as well as the ancient trees and third waterfall, Huang Nam Keaw.

Heading south away from the bridge, the road passes Mark House, the tiny little cafe Flying Fish, the cheap bungalows of Klong Chao Garden View and Koh Kood Divers office on one side.

Opposite , you’ll see the entrance to High Season and its never opened Italian restaurant, BB Divers office, with their couple of dorm rooms behind, Jong Cafe, one of the island’s few ATMs and the bistro Sea Dog. A crossroads sits at the top.

Inland to the Waterfall

By taking a left turn at these crossroads, you reach the entrances to the guesthouses on the river, Klong Chao Homestay, Ta Yai Homestay, Mangrove Bungalows and Cozy House.

Continuing inland through the coconut trees for another couple of kilometres, the road reaches the area known as Klong Khangkhao. Just before the small bridge, a small track leads to Mata Guesthouse with its handful of rooms and the Nature Trail for Khao Ruerab (Battleship Mountain), itself a gentle 45 minute walk through the forest.

The restaurant, Aroi and the popular bar, Bartist are next up as you arrive at the little grassy area. Turn left here for Klong Chao waterfall, one of the island’s best natural attractions, with the cute seafood restaurant, Ploy Mook and then the bungalows of Baan Sangjun and Baan Penseng along the way.

Alternatively, if you instead go straight on by following the narrow concrete path, you pass The Memory, a small bungalow operation, with PD Guesthouse, perhaps the most popular backpacker spot on the island, opposite.

Continue on still further and you arrive at Jungle Koh Kood, with its swimming pool, raised walkways and wooden cabanas and beyond that, the glamping tents of Coco Camping. They also run a small Muay Thai school. Shortly afterwards, set back among the tree, a large traditional Thai style wooden house serves as the homestay, Forestel. The road carries on past a few more locals’ houses until hitting a dead end.

Back at the crossroads by Klong Chao Garden View and Koh Kood Divers, a right turn brings you to the southern end of the beach at Tinkerbell Privacy. From here, you can walk all the way back along the strand to the sandbar at the other end, though it is not possible to cross the water to Tolani Resort on the other side.

The road, meanwhile, climbs a steep hill away from Klong Chao, with a sharp turn halfway up which leads to a school and the excellent cafe at Good View. You can also access this up the steep steps at the very end of the beach. Meanwhile, the excellent open-air Nuch Leuang Seafood is a hundred metres or so after the turning.

This route now heads out down the west coast to the central beaches at Ngamkho Beach and Bang Bao Beach, the south west beaches and ultimately to Ao Yai, the second of the island’s fishing villages, over in the far south eastern corner.

Permanent link to this article: https://explorekohchang.com/koh-kood/beaches/klong-chao-beach/

Klong Chao – Hotel Deal of the Week at Agoda 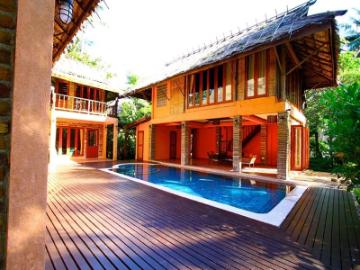