Salak Khok, Chek Bae and Long Beach are accessed with a left turn off the main east coast road, a kilometre or so after The Spa Koh Chang.

Salak Khok is a local fishing community with next to no tourism. It’s built in the mangroves on one side of a large shallow bay, with an outlet to the sea on the east coast.

Chek Bae, meanwhile, lies further south on the eastern shore of Salak Phet bay. It comprises a spread out village, dotted with simple Thai resorts and one more upmarket choice.

Down in the remote south east corner of the island, Long Beach is just that – a beach, but it’s wonderfully remote and undeveloped.

From the left turn off the main road, you first pass the local school on the bend, before reaching the understated entrance to Salak Khok’s mangrove walkway, with the temple on the opposite side.

In dire need of some considerable renovation, the raised walkway twists and turns its way through the forest. It’s free and takes no more than twenty minutes and includes an observation tower about half way along, giving you views above the trees and plenty of bird droppings. You emerge out the other end of the walk by a little (very good) somtam shack.

Continuing on, you come to a crossroads, where the left fork takes you to Salak Khok and the right fork towards Chek Bae and Long Beach.

Heading off that way, the houses here are widely spread out amongst the rubber tree plantations, orchards and pineapple fields, with a naval arch and its battleship crest near the start. You;; enter the actual village of Chek Bae – a few shops, a small fishing community, a local clinic and school – a few kilometres along.

Chek Bae’s resorts and guesthouses, Ban Mae, the luxurious Parama Resort, its offshoot Parama 2, the rental houses of Baan SuanNgaChang and Rommai Chailay with its pretty seafood restaurant, are situated by the water. All have great views across the bay to the uninhabited offshore islands of Koh Phrao Nai and Koh Phrao Nok and to Salak Phet itself on the other side.

In amongst them, you’ll find the village pier next door to Parama as well as the small selection of bungalows at the Thai style resort, Baan Suan Chow Lay. Look out too for 62 Cafe (currently closed) and the diner Kokomo (formerly of Klong Prao).

Your curiosity also can’t fail to be piqued by the Easter Island style statues. These are part of ongoing construction on yet another new Parama adjunct, which will also include a very deep swimming pool (perhaps for diving tuition, though nobody really knows) and 3 storey hotel block.

There are no beaches as such in Chek Bae, just odds patches of shingle here and there. It’s not an area where people swim but kayaking out to explore the bay is most definitely an option. It takes about 15 minutes paddle to arrive at the abandoned resort and beach of Koh Phrao Nok or Koh Sai Khao (white sand island).

Continue onto to the end of the main road and you reach the tiny English owned Journey’s End, just 6 or so bungalows on a grassy spot by the ocean and past them, two rough tracks continue on through the trees.

The straight on option brings you out at Ban Vitee Thai, a nicely located collection of long term bungalows for rent, while the left fork comes to the end of the line at Karang Bay View Resort. This Thai style resort with a just a few rooms and restaurant sits in its own sheltered part of the bay with a tiny sandy beach. You can actually swim here as welll as snorkel.

Along the main road of Chek Bae, just after Parama Resort, another smaller road signed for Ban Aoluk branches off into the interior. This is the one you need for Long Beach. Happy House restaurant is on the corner.

Previously famed for its awful state of degradation, landslides and constant closures, the road has been upgraded over the last few years to make the drive considerably more agreeable. About half way along you can drop in at the little National Park station for the viewpoint, with its useful maps pinpointing which island is which far out into the archipelago.

Long Beach lies towards the end of the road, with the entrance to Treehouse Bungalows clearly signed. This was the offshoot of the former backpacker haven on Lonely Beach, long since gone and this one too fell into disrepair.

Happily though, the same caretakers as the never opened/ finished Long Beach Resort above, took it over a few years ago and knocked it back into shape. You can stay in the old style Thai beach huts but more significantly, it makes for a very popular lunch stop.

It’s an impressive beach, sitting in its own pretty bay, with good sand and clear waters but the ocean flotsam, particularly from the fishing fleets, does wash ashore in unbelievable amounts. Behind the beach, apart from the buildings at the northern end, there is nothing but long grass and coconut trees, all adding to the wild atmosphere.

As a place to stay, Long Beach will only appeal to a certain kind of traveller. Though electricity is slated to arrive in the next year or so, the location will remain very remote and the accommodation very basic. You can’t very easily pop out for a change of scene or something from the shops and you’ll also have only the company of those around you.

As a day trip, on the other hand, the trek out there is most definitely an adventure – stunning scenery and a road now so much easier than before.

The road carries on after the entrance to Treehouse, past Long Beach Resort and above the back of the beach itself, until it reaches the entrance road leading down to Tantawan Resort. Opposite, there is a path through the fields to the southern end of Long Beach itself.

Tantawan, boutique bungalows on stilts over the water used almost exclusively by Thai packages, is located in a lovely bay overlooking Koh Ngam, a tiny offshore island with a picturesque white sands beach, so close one almost does not realise it is a separate land mass.

After Tantawans’s entrance, the frigate-shaped naval memorial at Hat Yuttanavy, which sits at the top of a charming little beach, is your final stop. Annually, local dignatories conduct a small ceremony here in commemoration of lives lost during the 2nd World War when the French Navy scuttled 3 Thai warships just offshore.

You can actually continue on again still further for a few hundred metres to literally the far tip of the Koh Chang east coast, from where there are fabulous views across to Koh Ngam and back to Tantawan. It is as remote as it gets but even that peace is occasionally broken by a Koh Mak speedboat, which uses this bay as a shortcut on its way to and from Laem Ngop Pier.

Returning all the way back to the crossroads just after the mangrove walkway, its left fork, or straight on if you are coming back from Chek Bae, leads to Salak Khok.

Centred on a wooden walkway hidden in the mangroves, the village comprises traditional houses built on stilts, with the owners’ fishing boats moored up outside the front entrances. Pretty much undisturbed by tourism (and a sense that it will stay that way), the local community is tight knit and wary of outsiders, quietly going about their business, more than a tad disinterested in life outside in the rest of the island.

About half way along the narrow road, after the boat yard, Salak Khok Seafood sits at the end of a track joined to the wooden walkway. Primarily a seafood restaurant, and a good one at that, it rents out motorbikes and kayaks. In the building opposite, you can hire a gondola and a local gondolier to make a 45 minute tour of Salak Khok bay-, 200bt per person.

The road continues on to another small scrappy pier, where the locally caught shrimp and squid are unloaded. The outlet to the sea is just a hundred metres away.

There is nowhere to stay in Salak Khok and with that, maybe a nagging feeling that it is the one part of Koh Chang, where tourists could allow themselves to be excluded and leave the locals to it.

Permanent link to this article: https://explorekohchang.com/koh-chang/beaches/salak-khok-chek-bae-long-beach/

Chek Bae – Hotel Deal of the Week at Agoda 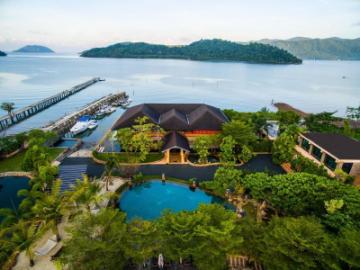