One of the longest and most impressive beaches on Koh Kood, Ao Phrao is the final stop on Koh Kood’s south west coast.

Like all the beaches at this end of the island, it’s an area of great tranquillity and seclusion, but unlike the others, Ao Phrao does have a small fishing village at the northern end.

There are four resorts on the sand itself, with another couple of guesthouses on the river behind.

Getting to Ao Phrao Beach

Continuing on down from Ao Jak Beach, the main road first passes the small homestay at Ban Choeng Kao followed by Relax Restaurant, a tiny spot of just a few tables, where advance booking is needed. Shortly afterwards, you reach a crossroads.

Turn to the left and you head over to the south east coast to Ao Yai, one of the island’s two fishing villages. Turn to the right and the road leads off to Ao Phrao, passing a temple up on the hill with an accompanying monastery opposite, before arriving at the back of the beach.

Here, Lee Red House offers a few bungalows before several sandy paths head off in different directions through the long grass towards the sea.

On the Beach and in The Village

The left of the paths above passes the large Ao Phrao Resort, popular with Thai tours, as wends its way to the southern end, where I-Lay House and Sunshine Resort, mid-range bungalows, are located side by side. Sunshine on the Rock is beyond them on the creek.

The right path leads to Rest Sea Resort, which sits on the sand at the northern end. You can take the sandy trail down the side of the resort to pass a motley collection of local houses and shacks by the river.

Sandwiched in amongst them, you’ll find the two guesthouses, the boutique Escape Life and the homestay style Gumm Lonely Club, both overlooking the mangroves.

At the end, Ao Phrao village – just a few houses and a school up the slope – straddles the bridge. Meanwhile, back on the beach itself, the cafe, V Ocean (now closed), cuts a solitary building back in the long grass.

Permanent link to this article: https://explorekohchang.com/koh-kood/beaches/ao-phrao-beach/

Ao Phrao – Hotel Deal of the Week at Agoda 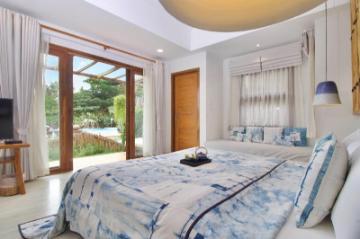