Ngamkho Beach is an area of some two to three kilometres located on the west coast between Klong Chao Beach and Bang Bao Beach .

In truth, the beach itself is not the island’s best, with it frequently disappearing completely at high tide, but the whole bay is still wonderfully pretty and it makes a great place to stay.

Most resorts are budget and mid-range, with one 2/3 star choice, Analay Resort, at the southern end. Beyond the resorts’s dining choices, there are some simple restaurants scattered about along the main road and the odd small store for buying essentials. The resorts themselves have their own shops and their proximity, one to another, also allows for wandering out for a change of menu.

After climbing the steep hill from Klong Chao Beach, passing the coffee shop, Chic Chom Phu and restaurants Chillout Cafe, Full Moon and Chaiyo along the way, the road drops down to the first of Ngamkho’s resorts, S-Beach Resort.

This is one of Koh Kood’s older places, its large assortment of different style bungalows mostly pulling in Thai package tourists but also hiding away a gem of a beach at the northern end. Indeed, it seems the resort has cottoned on to that little secret and now runs a small cafe by the sand, Million Beach, open to non-residents.

Along the road, two guesthouses, the Italian run Big Dreams and German run Happy Days Guesthouse sit side by side, with Paradise Divers at the front and the island post office at the rear. Both of the guesthouses closed during the pandemic and its seems the former is gone for good. Happy Days, meanwhile, may reopen together with the dive shop for the 22/23 season.

Opposite them, Pornthip Pizza provides mostly take away though there are also a couple of tables for eating in . On this same side at the end, the charming Nomkhon Station nestles by the creek down the track towards the sea, with the sometimes open Huggy restaurant at the far end.

Continuing round the next bend over the bridge, a ramschackle collection of local houses, including the homestay Lung Kluay and the popular cafe Black Bananas, straddle the small estuary just before the turning up to Khao Ruearab (Battleship Mountain) – a rock formation that resembles the bridge of a ship, another of the island’s natural attractions.

Taking that turning in, you find the restaurant and bungalows of Baan Suan Maprao on the right hand side and Far East Resort, another Thai style resort on the left – look out for the sea-plane. Its own offshoot restaurant, See The Sun, has now moved here from Ao Yai.

Continuing on along the back route, the bungalows and diner of Suan Nai are located on the bend after the now abandoned building merchants, whilst the Aussie/Thai venture, Pink Elephant has rooms too at the back of its coffee shop (known for its Vietnamese style signature cup).

Once you reach Khao Ruearab, you can pick up the nature trail, on foot only, which leads all the way back to Mata Guesthouse, inland at Klong Chao Beach, a not too strenuous hike of about 45 minutes.

Meanwhile, back on the main road, oceanside, the long established resort Dusita Resort offers mid-range bungalows in an immaculately tended garden, with the bistro Kood Vibes newly opened up by the road.

At at the southern end of the beach, the very popular traveller hang-out Ngamkho Resort, sits under the coconut trees, whilst across the road and the little bridge, Ban Phuean, is home to a handful of bungalows in a clearing.

On the hill above, Horizon Resort has now closed and been taken over by Kinnaree Resort, which has its own restaurant, Khao Kaeng at the front as you turn in.

Analay Resort, the 2/3 star choice on Ngamkho Beach, occupies the next cove along, with its main entrance shortly after the turning into Kinnaree. It also looks down on its own very pretty beach, known locally as Sai Daeng. You can access this either via the resort itself or by taking the unmarked sandy track leading off the main road half way up the hill.

Permanent link to this article: https://explorekohchang.com/koh-kood/beaches/ngamkho-beach/

Ao Ngamkho – Hotel Deal of the Week at Agoda 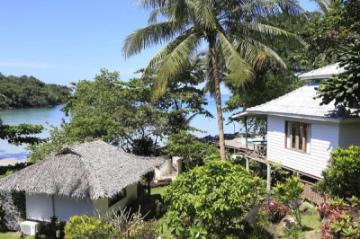