View from the southern end of Bang Bao Beach

Bang Bao Beach, also known as Klong Goi or Klong Kloi Beach, is the final beach on the west coast. With its fine sand, calm waters throughout the year and great views across the bay to Bang Bao Pier, it has witnessed a slow and steady development, quietly managed by the sole land owner who has resolutely held out against the large scale investors.

Both on the beach and around the creek at the top end, there are an increasing number of places to stay, ranging from cheap fan huts through standard a/c bungalows up to small boutique resorts.

Bang Bao Beach has become the day beach of choice for those that find Lonely Beach a bit too busy and of course, for those staying at Bailan Beach and Bang Bao, which do not have their own stretch of proper sand.

Beach style restaurants, with their deckchairs out front, together with a couple of low key bars and the odd massage spot ensure the overall mood is very laid-back, friendly and relaxed.

Songthaew taxis happily run out here during the day, but come dusk, they will ramp up the prices considerably, not least because they are unlikely to be bringing anyone back the other way.

Leaving Bang Bao village and just after the condos of Tranquillity Bay, the road passes Rasta View Cafe with its magnificent vista down onto the bay beneath. Its bungalows offshoot Rasta Beach and its minimart lie alongside, followed by Secret Garden, a family house and bungalows for rent down on the rocks by the sea. There is also one of the Koh Chang’s National Park offices on the forest side of the road.

Shortly afterwards, you reach Hat Sai Noi, a tiny stretch of beach that has become home to a handful of places to stay, relaxed restaurants and the odd bar.

The dorms of Home Hostel and the practical mini portacabins of Beach Box @ Koh Chang are on the initial bend, whilst on the sand itself, the whitewashed bungalows of the popular Indie House are the principal accommodation. Maya Guesthouse is your other option.

Maya has a good restaurant too, with its neighbour the long running, excellent beach diner I-do I-do . Djembe, perhaps the island’s original hippie hang-out, is at the northern end – bar, homestay and parties, where didgeridoos feature heavily alongside the drums.

You can walk from Maya along the sand, over the rocks in front of Secret Garden to Rasta View Bungalows and then up to Rasta View cafe in about just over 5 minutes – it’s not a big area!

Walking along The Beach

A few hundred metres further on, you arrive at Bang Bao Beach proper. A small bridge crosses the creek, with The Beach and Yu Yu Golden Beach located at the top end, with their tables, deckchairs and loungers laid out along the sand.

The Beach also provides rooms in a simple building behind, whilst Yu Yu Golden Beach offers three rows of brightly coloured bungalows, including one set with balconies opening out onto the creek itself.

Continuing south down the beach, next door to Yu Yu Golden Beach, Sea Paradise is the base for Koh Chang Stand-Up Paddling (SUP), as well as having a small restaurant and some rooms. Alongside them, Green Garden is the replacement to Mr T’s T-Bar – he has returned to Trat after many years of providing the evening entertainment in these parts.

The restaurant, Rim Ray and the remnants of BB Beach (shut down), the beach bar offshoot of the dive company, BB Divers, complete the set.

Klong Kloi Cottages, cheap to mid-range bungalows arranged in a semi-circle with more choices at the back and Bang Bao Beach Resort, pricier wooden huts in a row, are the accommodation choices, with Bamboo Hut restaurant and its cooking school, sandwiched between them.

Further down the beach still, the upmarket boutique resort, Chivapuri Beach Resort, with its large Lanna style villas and swimming pool, nestles back amongst the trees, while Tropical Beach Resort (closed down) sits at the very end. There is camping available, Forest Beach Campsite, in front of the abandoned bungalows of Tropical

If you keep walking, you reach a weir and in the distance, another group of buildings is clearly visible. This is Koh Chang Boat Chalets, a huge resort which has undergone many name changes and re-inventions over the years but resolutely remains deserted.

The 30 metre high converted ship did serve as a hotel at one point. It is only accessible by following the road behind the beach to its end, see below, whereupon a 100bt entry fee is levied if you are not resident.

Back at the bridge, if you wander to the left down the trail rather than heading down the sand itself, another area, a sort of grid, has developed. Yu Yu’s waterside bungalows are on your left followed by Ginger Home (Chan Siam), a bar, tattoo and restaurant which has tables and chairs overlooking the creek. Its original camper-van mobile bar sits out front, the entrance to Sea Paradise diagonally opposite. The Welsh owned Lakchai, six or so bungalows and its 2 storey house end the row.

After Lakchai Bungalows, the trail curves back round past Yaree, cheap diner, to join another wider trail, where Yak Bungalows are hidden away behind the hedge. Head past them to the righ and you can access Klong Kloi Cottages down on the sand. Going the other way away from the beach and you pass the entrance to Treehouse Cottages, which is also on the lagoon, on your left.

A few metres further on, also to the left at the tiny Mandala (Bamboo) restaurant and rooms , three more sets of backpacker bungalows are hidden away down yet another path, Family Huts, Sea You Place and right in the mangroves, Freedom Home.

After Treehouse Cottages, meanwhile, the main trail passes the now closed down Santisook Bungalows, with sadly more abandoned cheap restaurants on the other side. At the junction at the top, bear right for the access routes to Bang Bao Beach Resort, Chivapuri Resort and Tropical Beach Resort.

Bear left and the dusty trail leads you around the corner, past Green Garden Bungalows (same owners as the seaside restaurant and bar) and ultimately back to the actual main road, which itself runs in a 3 kilometre arc behind the beach all the way from the starting bridge.

To get on to that main road, you simply ignore the little bridge at the start of Bang Bao Beach and instead follow the road, which heads up and round the creek passing Chaipura Resort, with its restaurant on stilts over the water, at the beginning.

After a short distance, there is a turning to the left, which was and in theory, could still be the back road to Salak Phet on the east coast. Despite what many maps might indicate, this section has never been completed due to a lack of funds.

Here in Bang Bao Beach, you can take the road and explore. Chai’s Tea Garden (currently closed), unique refreshments and camping, is tucked away a couple of kilometres in but the route is severely degraded and it comes to a dead-end in the form of a broken bridge. If you clamber over to the other side, you can continue on foot but after a few hundred metres, the jungle has taken over and it soon enough becomes impenetrable.

You can follow the other end from Salak Phet by heading to Wai Chek Beach, but once there, that route too stops abruptly at its own collapsed bridge. It is now possible to cross the dried up river bed and keep going till the ever narrowing road runs out and then on foot continue down the path till you hit the dead-end at the rock slope. From here, you are just a few tantalising kilometres from the Bang Bao Beach end, but unfortunately, the two do not meet.

In early 2018, the Army Prime Minister gave the latest go-ahead for funding to complete the project. The locals, perhaps better versed in such matters, are still not holding their breath on construction starting anytime and as of mid 2022, nothing has yet happened – though, of course, the pandemic has hardly helped.

After this turning inland, the main road itself carries on behind the beach. It is a lovely drive through the forest, which passes along the way the long sandy track, the back route as described above, to Chivapuri Beach Resort, Tropical Beach Resort and the actual beach, before stopping rather abruptly at the kiosk for Koh Chang Boat Chalets and its 100bt entrance fee. If you do not want to pay the money to go in or cannot persuade them to forget the fee, you must retrace your steps.

Permanent link to this article: https://explorekohchang.com/koh-chang/beaches/bang-bao-beach-klong-kloi/

Bang Bao Beach – Hotel Deal of the Week at Agoda 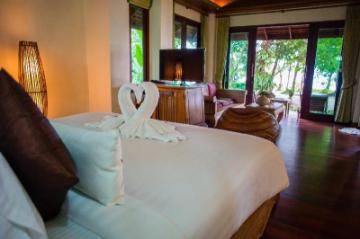 This website uses cookies to improve your experience while you navigate through the website. Out of these, the cookies that are categorized as necessary are stored on your browser as they are essential for the working of basic functionalities of the website. We also use third-party cookies that help us analyze and understand how you use this website. These cookies will be stored in your browser only with your consent. You also have the option to opt-out of these cookies. But opting out of some of these cookies may affect your browsing experience.
Necessary Always Enabled
Necessary cookies are absolutely essential for the website to function properly. These cookies ensure basic functionalities and security features of the website, anonymously.
Functional
Functional cookies help to perform certain functionalities like sharing the content of the website on social media platforms, collect feedbacks, and other third-party features.
Performance
Performance cookies are used to understand and analyze the key performance indexes of the website which helps in delivering a better user experience for the visitors.
Analytics
Analytical cookies are used to understand how visitors interact with the website. These cookies help provide information on metrics the number of visitors, bounce rate, traffic source, etc.
Advertisement
Advertisement cookies are used to provide visitors with relevant ads and marketing campaigns. These cookies track visitors across websites and collect information to provide customized ads.
Others
Other uncategorized cookies are those that are being analyzed and have not been classified into a category as yet.
SAVE & ACCEPT
Thailand Re-Opening

As of 1/9/22, requirements for entering Thailand are as good as back to pre-pandemic status.

Do please contact us for all your travel and holiday requirements – private transfers, share minibuses, boats, linking from Cambodia to the Koh Chang Islands as well as private boat trips, join trips, activities on the islands and much more besides.