Accessed by two separate tracks leading off the main road, Klong Hin Beach is the second of the beaches which line Koh Kood’s south west coast.

It’s a charming horseshoe bay, with clear blue waters and a nice sweep of sand, though the sea does retreat a long way into the distance at low tide.

At the northern end, the boutique resort, Hideout Resort Koh Kood sits, perfectly secluded, in an adjoining cove. On the actual beach itself, Klong Hin Beach Resort has the complete run of things whilst, at the far southern end, A La Kood occupies a couple of magnificent stilted houses over the lagoon. Montana, on the same creek, has closed down.

There are no other shops or restaurants.

On the Beach | Southern End by Vehicle

Turning in off the main road at the turning signed for Klong Hin Beach Resort and Cham’s House, you take the left fork. Follow the concrete lane through the forest and once it becomes more of a trail through the coconut trees, take the left path rather than going straight on. Eventually, you’ll arrive at the entrance to Hideout and carry on further, you reach Klong Hin Beach Resort at the northern end of the beach itself.

Klong Hin Beach Resort is used almost exclusively by Thai tour groups and its bungalows are laid out in rows just back from sand. You can park up, smile sweetly and walk straight through to the sand and sea. At the northern end, a sheltered bay serves as the base for a few speedboat companies.

If you walk down to the southern end, you can cross the inlet to the southern headland, where the restaurant of Montana now sits abandoned, with their decaying cottages to the left on the lagoon. Climb up the headland a little and you’ll find an old concrete path which you can follow until the broken mini bridge around the corner.

This was the original road which ran from here to Ao Jak Beach and then onto Ao Phrao Beach. Up to 2015, you could get along here easily on a motorbike or on foot, a really lovely coastal trek. Unfortunately, though, the locals lost interest in it as the main road improved and one guesses the maintenance budget from the government dried up. So nowadays, it has been largely left to nature and is slowly disappearing, a real pity.

Back at the lagoon, meanwhile, A La Kood, offers up ten rooms in two converted wooden fisherman houses, which perch on stilts over the water, joined by walkways. Dip under the bridge and you can find the entrance if you fancy a nose about.

Getting to the Southern End by Vehicle

To reach A La Kood by vehicle, you need to ignore the initial turning as described above and instead continue on down the main road for another couple of kilometres, passing restaurants Koh Kood Bistro and Kuba Lounge along the way.

Shortly afterwards, you will spot a signed (Montana) turning by the coconut farm, which takes you on a tortously bumpy track for two to three kilometres through the forest until you emerge out at the back of the resort.

Permanent link to this article: https://explorekohchang.com/koh-kood/beaches/klong-hin-beach/

Klong Hin Beach – Hotel Deal of the Week at Agoda 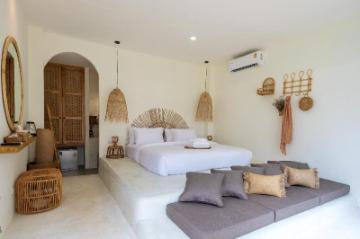