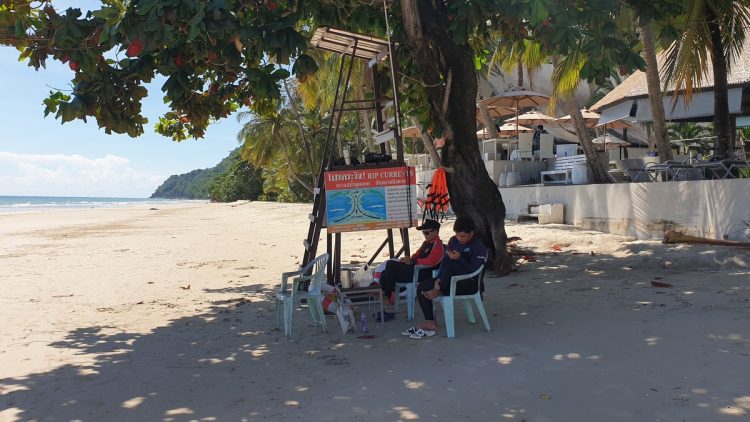 Volunteers at a riptides station on White Sand Beach

Rip tides have claimed the lives of two tourists in separate incidents off the Koh Chang beaches in the last week.

A 19 year old British tourist died from drowning after going swimming off White Sand Beach early on Sunday morning, 14th August. Later named as Bryony Freestone, a student at Exeter University, she was found unconscious at the northern end of the beach near KC Grande Resort.

Koh Chang local volunteers attempted to resuscitate her at the scene before she was transferred to Koh Chang International Clinic. On her arrival there, doctors tried unsuccessfully for two hours to save her life. The body of the student, who had only been on the island for a day, has been sent to the British Embassy in Bangkok for autopsy.

“We are supporting the family of a British National who sadly died in Thailand on 14 August.”

This drowning follows the death the previous day, Saturday 13th August, of a German tourist, who perished off Klong Prao Beach.

Concerned that his two sons had strayed too far into the sea, 55 year old Christoph Ralf Sigloch entered the water to shepherd them back to shore. He too then got into difficulties due to the stong waves. Despite volunteer rescue attempts back on the beach, he was pronounced dead at the scene.

Authorities have warned again of the danger of rip tides or rip currents in the seas off Koh Chang and asked tourists to be especially vigilant. Koh Chang uses the international signage of red flags, which are posted on all beaches when conditions are dangerous. Visitors are urged to pay attention to them.

Local business owners and residents too repeatedly stress the need for extreme care when taking to the water at this time of year, the rainy season in Thailand, which runs from May to October.

Back to News from The Islands

Permanent link to this article: https://explorekohchang.com/features/news/koh-chang-rip-tides-drowning-august/